History
The Royal KLM Dakota PH-PBA, livery of the Fifties, was built in 1944. She was in service with the 8th Air Force during the Second World War and was flown in Operation Market Garden. After the war the aircraft was acquired by his Royal Highness Prince Bernhard, Prince of the Netherlands and later became the first official aircraft of the Dutch government. After retirement in 1975 the aircraft became part of the collection of the Aviodrome museum. It was put back in service in 1998 and it has been flying ever since. In 2010 she received her current historic KLM colour scheme and was christened ‘Princes Amalia’, after Prince Bernhard’s great grandchild, the second in line of succession to the Dutch throne. 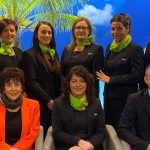